He will be part of a Conservative government with a healthy majority after the party enjoyed a surge of support up and down the country.

At the end of a huge night for the Conservatives, Mr Cox said Labour and the Liberal Democrats had paid a 'heavy price' for not 'respecting democracy'.

"This nonsense that the British people did not know what they were doing in 2016 has been once and for all completely discredited," said Mr Cox.

"The British people have known exactly what they are doing today and they are voting to leave the European Union and that ultimately, I believe, is the secret of the problem the other two parties have had.

"They have not properly respected the democracy of this country and you pay a heavy price for that." 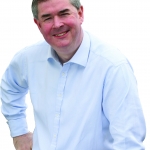